Over the past two years, Nova Communications has been proud to help support the implementation of the TMR2 system in Nova Scotia. Working closely with the Province of Nova Scotia and system owner Bell Mobile Radio, Nova Communications has played an important role for supply, installation and implementation of municipal TMR2 systems for public safety organizations across the province of Nova Scotia.

Recently, the Nova Scotia TMR2 project was featured in Mission Critical Communications, a wireless communications industry trade magazine. It highlighted the interoperability of the new Motorola P25 TMR2 system, and the benefit for public safety organizations, like our customer Kentville Police and Fire Departments that are pictured in the article. Take a look!

By Todd Brown and Ron Dingwell

When the radio crackled to life just before 7:30 p.m. on a warm night in 2014, veteran Royal Canadian Mounted Police (RCMP) Constable Jay Doiron said something over radio that no police officer wants to hear.

“Male. Late 20s. Camouflaged all over. Brown headband. Shoulder-long brown hair. He has a bow on his back, maybe two rifles, a knife on one leg, and he was really bizarre to everyone. Walking straight. Possibly under the influence of something. “

Doiron was positioned behind a telephone pole. That was his only cover in a busy suburban neighborhood in north­western Moncton, New Brunswick, a small, prosperous city of 70,000 in eastern Canada.

He was one of four officers who were first on the scene – two primaries and two backup – after multiple panicked calls came streaming into the city’s 9-1-1 call-taking center beginning at 7: 18 p.m.

Doiron hadn’t seen the suspect himself, but once on scene he quickly collected descriptions from nearby residents. They told the officer they’d seen a young armed man in fatigues move into the wide, wooded area at the top of the street.

Doiron called for a perimeter to be set and for a dog team to be dispatched.

At 7:38 p.m., with multiple officers headed toward the scene, Constable Matheiu Daigle, who had stationed himself at the edge of the wooded area to the southwest of Bromfield Court, spotted 24-year-old Justin Bourque walking slowly in the woods, listening carefully as if he was hunting.

A few minutes later Jean and Joanne Gagne, who lived on the street east of Bromfield Court, saw Bourque creeping through the woods. Suddenly, they observed him drop to his belly and fire off two shots from a semiautomatic rifle toward Constable Gevaudan, who was approaching Bourque from the southern side of a large home.

Sixteen minutes later, five RCMP officers had been shot – three of them fatally. The city was on lockdown and at the beginning of what would tum into a 30-hour manhunt involving multiple police forces and hundreds of officers, including from surrounding provinces, as well as units of the Canadian Armed Forces.

It was Canada’s second-worst case involving the murder of on-duty police officers. The families of the three men, their colleagues and friends, the community, province, region and nation were devastated.

Bourque surrendered the next day, beginning a period of official reflection on what led to the horrifying tragedy. That reflection touched on several issues, including mental health, police accessibility to semi-automatic carbines, training and communications.

In response to an internal review, one police agency publicly stated that one of the most significant challenges during the incident involved “radio use, interoperability and encryption,” the lack of which limited effective communications. With more than 500 first responders from multiple agencies and jurisdictions surrounding Moncton involved in the response, the incident underscored both the importance of effective interoperability and the necessity of coordinating the movements of those units that required encryption.

The events of that night also had a profound impact on a team of government officials, police technologists, radio system users and consultants working to implement a new, large multijurisdictional radio network that was being built to blanket Moncton and the three-province, 50,000-square-mile region surrounding it. Trunked Mobile Radio 2 (TMR 2) was scheduled to begin pilot testing that same month in the neighboring province of Nova Scotia.

The system is one of the first examples of a multistate, Project 25 (P25) voice radio system in North America. The 20 l-site Motorola Solutions ASTRO 7.14 system is up and running in the first of its two zones – the provinces of Nova Scotia and Prince Edward Island – with the second zone expected to be finished in November 2016. It will be shared by virtually all public safety and public works field staff and volunteers – estimated at 23,000 users – at all three levels of government operating in the region.

“The system will have a very high level of interoperability in almost every way imaginable,” says Mike Musial, project manager for TMR 2’s implementation in Nova Scotia. “From the project’s early days, there has been a: growing awareness among the project teams, staff and users in all three provinces that we had two necessary, but in many ways opposing, forces at work. One was the plan for a very high level of interoperable communications, and the other was the need for police, enforcement agencies and others to have a system capable of the highest level of encryption.” 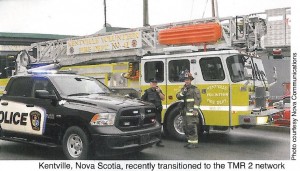 Even as the radio system was being implemented, teams were working on developing a management system and standard operating procedures to coordinate encryption for all users in the region.

“It was one of a lot of very important things we were working on at the time,” says Musial. “There was a time when it was quite a challenge to know what was most important, but the tragedy in Moncton put it front and center, and it worked pretty effectively to focus our energies on getting this piece as right as it could be.”

One partner government acquired a key management facility (KMF) to share across the region. The KMF is a Motorola-supplied, P25-compliant, mission-critical enterprise tool that coordinates secure key management and distribution for up to 16,000 radios, more than enough for the expected number of encrypted radios across the Maritimes. Its building blocks include client/server software, the server and Windows-based operating system, and a Crypto Card. It supports Advanced Encryption Standard (AES), a virtually unbreakable 256-bit encryption key.

The project team began work to develop a KMF standard operating procedure, which joined with some key policy decisions and quickly became a management system for all encrypted radios in the system. Balancing the needs of agencies that required encryption with the need to build interoperability among agencies soon became a high-wire act.

“Joint operations involving many different police and enforcement agencies is becoming an increasingly frequent thing,” says Tom Conrad, a radio asset manager who worked on developing the standard operating procedure. “At the same time, some agencies, for very good reasons, are going all encrypted. In an environment like that, close coordination of encryption between multiple agencies becomes very important, very quickly. You don’t want to have one force rolling to a scene with an encryption key that doesn’t coordinate with other responders.”

The project team developed a management system that calls for all encrypted radios to be managed through a single KMF for the entire three-province region. Smaller key loaders, tools typically used by single or smaller agencies to manage just their own encryption needs, are to be strictly controlled, all with the objective of ensuring encryption keys for all agencies remain in sync.

Additionally, the team developed asset management and documentation procedures that all agencies with encrypted radios must follow if they want to use TMR 2. Those procedures include regularly changing encryption keys over the air, policies around remotely inhibiting radio functionality from a dispatch console, or even removing the encryption keys when a radio or the vehicle hosting it is sent to a nonsecure commercial repair facility. There are procedures around reporting lost or stolen encrypted radios so they can be quickly disabled and taken off the system, along with regular audits of agencies using encryption to ensure they know where their encrypted assets are at any given time.

“We were very conscious of not creating a management system for this that meant a lot of work for police departments,” says Musial. “They’ve got enough to do, so we’ll manage it all through the dispatch centers. Organizations using encryption will only have to make a couple of phone calls to a designated dispatch facility. One call will ensure that the radio is either inhibited or that the encryption key is removed when the asset is not in their physical control, and the other will make sure the radio gets uninhibited, or that the key gets put back in the radio afterward. Other than that, and keeping their records current on their encrypted radio fleets, that’s all they have to do. Almost all of the changes get managed over the air.”

The project team believes that of the expected 23,000 radios on the system, as many as 6,000 to 7,000 radios spread across about 25 agencies at all levels of government will be subject to coordinated encryption management.

“There is going to be a lot of work and coordination involved,” says Musial. “But when you think of things like Moncton, and the things that could happen on joint operations when interoperability isn’t there, or encryption is not coordinated, it’s work that won’t require motivation. Everybody knows what’s at stake.”

Todd Brown is director of public safety and field communications for the province of Nova Scotia, Canada.