Upgrade Options for Customers with Motorola’s HT750 and HT1250 Radios

Motorola has a long-standing reputation for creating some of the most durable and high-quality two way radios on the market. In particular, their HT750 and HT1250 radios were extremely popular with those in manufacturing, construction and fire departments. The reason was due to these radios having excellent craftsmanship and the ability to hold up under the harshest conditions.

However, unlike companies that sometimes replace their tried-and-true products with inferior models, Motorola has upped the ante with the XPR7350 and XPR7550 radios. These new radios actually improve upon what was in the classic HT750 and HT1250 radios, but raise the bar with industry-leading features.

Here at Nova Communications, we carry these new Motorola XPR7350 and XPR7550 radios and want to show you why you’ll find them more useful. They offer new features that provide greater efficiency, while still maintaining the durability you enjoyed before. Plus, there is a new protective layer that is ideal for those working in harsh conditions.

One notable feature of Motorola’s XPR7350 and XPR7550 is it’s easier migration to digital. Both radios mentioned above have options to operate on analog frequencies, if you don’t have the immediate budget to go digital.

Over time, you may upgrade your fleet with better technology. As you go digital, you won’t have to worry about investing in new radios. Motorola lets you easily re-program your system to a digital frequency, which can improve battery life, sound quality and signal range.

Motorola now focuses on using IMPRES batteries, which have substantially longer life than any battery they’ve used before. You probably remember the frustration felt when the prior radios you owned went dead half way through your day of use out in the field. With the XPR7000 series, you’ll have a battery lasting up to 17 hours in digital mode and 11 hours in analog. As a result, you also get a more consistent charge and can save yourself up to 40 percent on replacement batteries.

The greatest new feature of these new radios is that they are waterproof. This is something that you might have felt was missing with their prior radio series. Now, they have an IP57 rating for not only being waterproof, but for being submersible as well.

When you’re working in unpredictable conditions, waterproofing is essential to keeping your radios functioning at all times, especially for fire departments and in industrial settings, where exposure to water is inevitable. Even with these improvements, Motorola continues to place their attention on making their radios durable against the elements.

Going wireless should become a more vital part of industrial, construction and fire department industries. Considering all these jobs require holding things in precarious situations, having to hang on to a radio can become cumbersome.

Motorola’s new radios offer Bluetooth integration so you can use earpieces and headsets. Now, your employees can choose to work hands-free for enhanced safety. This can help to reduce injuries on the job when employees need to communicate while performing other important tasks.

Motorola has also extended their warranty from their previous radio series. Now, you have a three-year warranty so you can have repairs done, even after years of regular use. No doubt, these two way radios will be made to withstand some pretty harsh conditions that may require repairs throughout their life.

Still, the rugged design has unmatched quality in the industry with tight seals to protect against wind and dust.

When you upgrade your Motorola radios, you can enjoy great promotional pricing when you shop with us, making your buying experience quicker and more affordable. Contact us here at Nova Communications to find out more about these promotions and the new features available with Motorola’s excellent XPR7350 and XPR7550 two way radios. 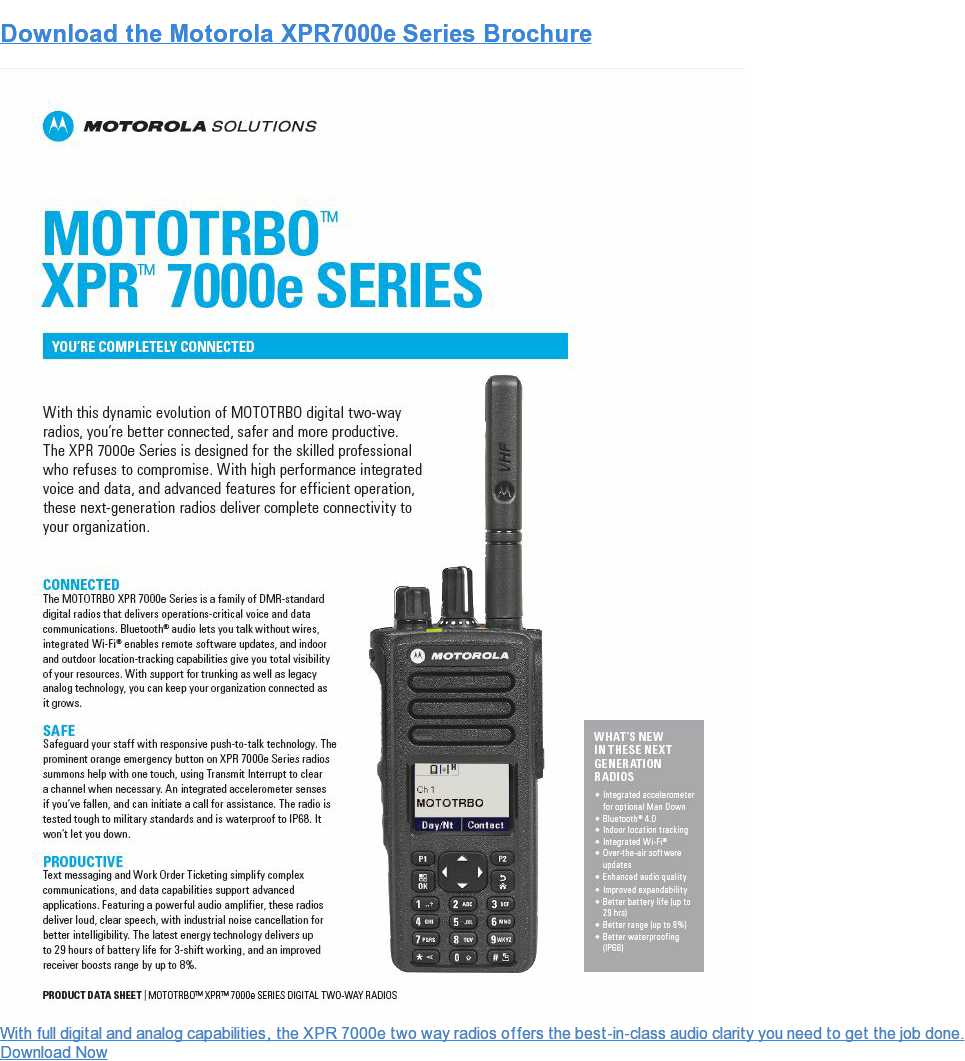