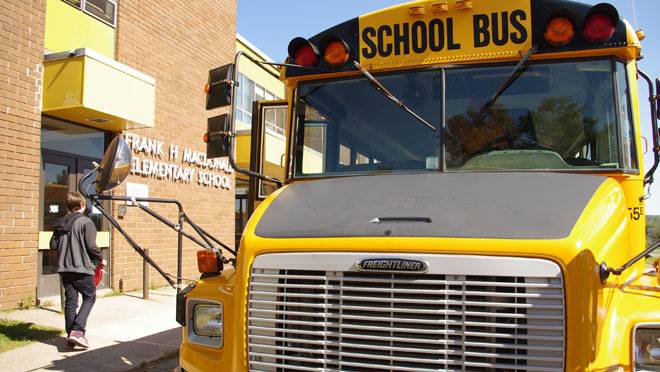 Big Brother may be watching, but some would say that is not always a bad thing.

Over the past couple of years, several provincial school boards have installed trackers on school buses that allow boards to monitor everything from location and speed to extraneous Tim Hortons trips.

School boards say the devices have allowed them to improve safety, reduce idling and save hundreds of thou­sands of dollars.

“They’ve given us great effi­ciencies; they really have,” said Colleen MacMullin, trans­portation co-ordinator for the Cape Breton-Victoria regional school board, which installed the units on the last of its 105 buses last week.

“There’s significant changes in the number of kilometres and the amount of fuel that we have used in the last year.”

The Strait regional school board estimates it has saved about $400,000 a year since installing the global po­sitioning system-style units on its 128 buses and 20 service vehicles in the summer of 2010.

The initial purchase was funded by Conserve Nova Sco­tia, a now-defunct provincial agency, as part of an effort to reduce the environmental foot­print of school buses. The Strait board pays $50,000 a year to continue the service.

“We are very pleased with the benefits we are achieving with the implementation (of) a GPS system,” a board spokes­woman wrote in an email.

Those benefits include sav­ing 66,000 litres of fuel per year, receiving lower insurance rates and reducing the number of bus runs. The Strait board scrapped eight runs – elimin­ating about 814,000 kilometres of driving per year – by using the tracker’s data to identify inefficiencies in bus routes.

The automatic vehicle loca­tion units, as they are known in the industry, allow board staff to track location, speed, idling, stops, opening and closing of bus doors and use of the driver-side stop sign.

Many bus drivers are re­quired to complete a quick vehicle inspection before set­ting out on their route. The trackers can monitor aspects of that inspection, too, such as whether the driver opened the hood of the bus to check the engine.

Sandy Lynds, transportation co-ordinator for the Chignecto-Central regional school board, said parents and schools appre­ciate the service because if a child gets on the wrong bus, the board can easily com­municate with drivers to pin­point the exact location of the student.

The system is also useful for resolving disputes, Lynds said.

“Once in a blue moon, the public told us, or other drivers, I seen so and so here, there, someplace he shouldn’t be, and we physically had to drive out . . . to see if they were or they weren’t. It was very time­ consuming.

“So now, if somebody calls and says the bus is sitting at Tim Hortons, I go on the com­puter and see if it is or not. I don’t have to jump in my truck and drive there.”

When Chignecto-Central drivers first heard that the technology would be installed on buses, some were worried that board staff would be scru­tinizing their every move.

“Some of them were a little upset or concerned that we were going to be sitting there watching them 24-7,” Lynds said.

But that is not the case, he said.

“If somebody comes in, espe­cially if you get a number of calls about one bus, well, yes, we can go in and see what’s going on and see if there’s any truth to it or not.

“But, normally, most of the time, that’s all we’re going to do. It’s not a Big Brother thing to see what they’re doing or not doing.”